Your Guide to Celebrating Hanukkah in Israel

Hanukkah is celebrated around the world and is an important and iconic part of Jewish tradition. While you can find amazing festivals the globe over in honour of this holiday, nothing beats celebrating Hanukkah in the hub of Jewish culture: Israel. If you’re headed to Israel this holiday season and are looking to join in on the festivities, read up on our guide to celebrating Hanukkah in Israel so you can revel like a local!

Hanukkah varies from year to year and this time around runs from the 24th of December to the 1st of January. The holiday is scheduled according to the Jewish calendar which uses a twelve-month lunar calendar with the occasional thirteenth month thrown in (kind of like a leap year). Hanukkah without fail falls on the 25th day of the month of Kislev and ends on the second day of the month of Tivet. Although the dates for Hanukkah never actually change, it seems like it if you’re following the same calendar year most of the world does!

In Israel there are a variety of activities to take part in during the eight-day celebration of Hanukkah. A torch relay marks the beginning of the festivities and is an incredible event to witness. The Hanukkah Torch Relay begins in the city of Modi’in (about halfway between Tel Aviv and Jerusalem) where people line the road leading to the nation’s capital. A torch is passed from hand to hand all the way to Jerusalem’s Old City where it is used to light the menorah on the Western Wall. 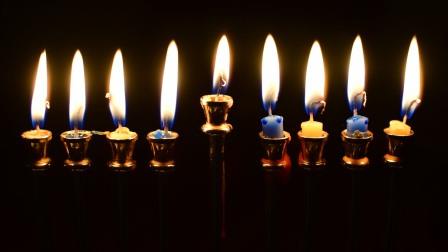 You may have already realised it, but light is an important part of Hanukkah and the holiday is at times dubbed the Festival of Lights for this very reason. Every day during Hanukkah families come together at dusk to light the Hanukkah one candle at a time so that by the eight day all the candles are alight. One of the best parts of celebrating Hanukkah in Israel is to go around after dark looking at the lights flickering in people’s windows. Regardless of whether you’re in Jerusalem or some other more far-flung town, you’re sure to find the cities shining bright with Hanukkah magic!

Brushing up on your Hebrew? Check out our free placement test to see how your level measures up!

In many parts of the world Hanukkah is celebrated as eight days of gift giving. In Israel, however, this is less so the case. If presents are given, they tend to be either candy or chocolates, money, or the famous dreidels. The four-sided spinning top (or dreidel) is considered a particularly good gift as some people are avid collectors and love adding a new item to their stock during Hanukkah. Even better, dreidels are used to play a symbolic game which is important not only to Hanukkah traditions but also because it brings the family together! 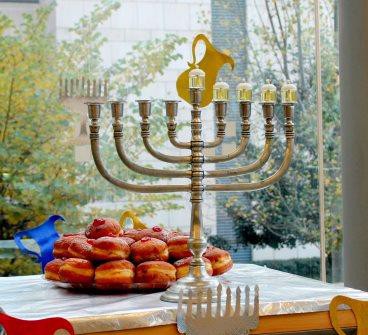 Food always plays a huge part in culture no matter where you go in the world and Israel is certainly no exception. During Hanukkah the entire nation is bursting at the seams when it comes to tasty treats. Sufganiyot is by far the most popular Hanukkah dish and should be eaten in copious amounts during your trip to Israel.  These sugar-covered fried treats can be tried plain or with a variety of fillings that include strawberry, halva, and chocolate flavors. Most Hanukkah dishes are fried in oil and cheese is a big staple.  Unleash the adventurous foodie in you and be sure to try a little bit of everything. You may end your trip a few pounds heavier, but you won’t regret it for a second!

Take in a show

In Israel, one of the best times of year to catch a show is during Hanukkah. Whether you are looking for theatre, dance, comedy, or children’s productions, there’s something for everyone. Music is a huge part of Hanukkah and there are many traditional songs that are sung throughout the holiday’s eight days. These tunes are featured in the Hanukkah shows as well as new ones to help tide you over between this year and the next. Be sure to get your tickets as early as possible though because a lot of shows tend to sell out quickly!

What are some of your Hanukkah traditions? Do they vary from how the holiday is celebrated in Israel?