The World as One, Part I

Today we have our own societies and cultures, we were born and live in any given country, we might have traveled or plan to travel to distant far away places, and for what? To see and experience new cultures, meet interesting people, learn different languages and ways of life; but is that all destined to change?

Many years ago there were no planes, travel was difficult if at all possible, people often lived exclusively in the cities and small towns they were born in, life was independent on the distant lands that people only ever saw on a map or heard about in stories. Today travel is not only far more accessible and affordable, it is almost expected that at least once in your life you should set sail to foreign shores, more and more people are choosing to live abroad, study and work and spend the rest of their lives in a new cultural environment, but what do people take with them unknowingly when they do this?

The answer is your own culture and background, the language you speak and your way of life; it’s as if you’re a drop of water entering a new sea, your presence might barely be noticeable, but what about the many others that travel there? One drop becomes a hundred, then a thousand, then a million, until the sea becomes a dilution of what was there and what has dispersed within it from elsewhere.

This, coupled with other factors such as music, television, films and the internet, has led to cultures becoming combinations of other cultures. The English language is almost present in all countries, the majority of young adults watch TV and have phones that access the internet, and the majority of all this is western media, whether it’s watching the latest Tarantino movie, listening to the new Foo Fighters CD, doing a quick Google search for the latest celebrity gossip, watching YouTube videos or episodes of The Big Bang Theory. It’s expanding and shows no sign of stopping, the world is taking this all in and as a result once unique and secluded cultures are being washed over with Westernization. 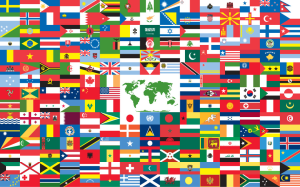 I don’t want to seem as though I am saying the West is evil for corrupting the world, that’s not the case, there are in fact plenty of examples of other cultures having an effect on Western culture. Listen to much pop music produced today and you’re likely to run into Latin instruments and influences. You have Chinatowns, pizza and champagne, and hundreds of words within English that have been taken from other languages.

This all being said, what does it mean for the future? If we continue on the current path where will we end up? Is it a good or a bad place?