Step into the Ring with Language

If we have any sports fanatics out there then I guess you have a rather different vocabulary than one who is not; you probably know what I’m taking about when I use phrases like “don’t bunt” and “he took it to the house,” let’s take a closer look at some of the words and phrases from particular sports, to see if we can find the origin.

First, let’s get the big debate out of the way: Soccer is a term used for football in the US, Canada, Australia and New Zealand as there are other codes of football present, in a way it is to avoid confusion and to associate with the sport more easily. It came from the British and was one of the first names to represent the sport, as there were other sports in existence using the football moniker; the early standard for what we know as ‘soccer’ was “Association Football,” which distinguished it from “Rugby Football.” Common at that time was putting “-er” on the end of words to create others such as “rugger” or “Assoccer,” which naturally led to “soccer.”

Now that we have that cleared up, let’s “get the ball rolling” and look at the phases from sports that have made their way into common speak: 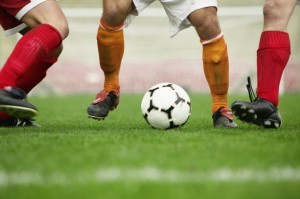 A “hospital pass” is the event that someone receives a ‘pass’ with little to no chance of avoiding a severe collision. You can use it when referring to someone who takes control of something in the midst of it’s end, such as a president stepping into office only after the previous has driven the country into turmoil.

The “moral victory” occurs when a person or a team loses, yet does enough throughout to impress, such as overcoming bad refereeing or a plague of injuries and to still make it a close contest, or to be severe underdogs and put up a fight. This can refer to anything in which a competition or battle exists, such as in war.

When you’re “hitting the wall” then you’re at the point when you’ve about exhausted all your energy reserves and in the process of collapse; it is also referred to as to “bonk” and comes from cycling and running, but can be used to mean the end of ones abilities, from getting too old to play competitively, to your old car no longer being able to cope with passengers.

It’s not only a TV show, “saved by the bell” is a boxing term, when you’re having the life beaten from you so badly you’re about to fall to your knees, the bell rings for a little intermission, you’ve been “saved by the bell.” 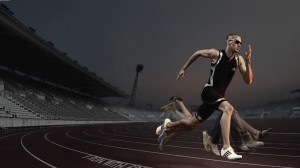 You’re “hands down” the best when it’s no longer a competition, it comes from horse riding when the win comes with such ease that the jockey can leave his hands by his side.

We’re on the “homestretch” now, see if you can guess the worldly use of terms like these: “I’ve got to keep my eyes on the ball, I might be on the ropes but now’s not the time to pull my punches, if I wasn’t hit with that low blow I’d be fine, now I need to roll with the punches, the gloves are off, I’m not down and out yet, step up and finish the assignment.”

Well, I’m throwing in the towel, what other sports terms do you know and use?

Comments on Step into the Ring with Language