Can You Give Up Your Native Language?

Your mother tongue is a comfort blanket when it comes to learning a new language. It’s something you fall back on, even when you shouldn’t. But, you’d probably be able to more effectively learn a new tongue if you gave up your native one altogether, right? What would happen if you decided to give up English for a full year? Or, in a more interesting scenario, were forced to give it up in favour of a global language? Let’s talk about how average language learners, like you or me, would fare!

Let me start off by saying that, as daunting as it sounds, it is possible to go English-free for months or even years at a time. However, how long you choose to do it completely depends on you. For a lot of people, the idea of going without their native tongue for an entire year is incredibly overwhelming, so it’s best to set a short term goal that you feel is obtainable. Since it takes roughly 3 months of intense study to become fluent in a language, a month or two are probably the best lengths of time to start with! The point is, other people have done it and you can do it too. You don’t need to measure yourself according to someone who successfully went a year or more without English, your journey is your journey.

With the exception of, say, calls home, you should completely immerse yourself in the idea of not using a word of English. This includes when you’re talking out loud to yourself, watching TV, or chatting with a friend. In the beginning you’ll miss having your native language as a crutch. There will be situations where you know speaking English will make everything a lot easier. In short, the first two weeks or so of your English ban are really going to suck. But then, something magical will happen! Things will start to click more easily, and in the long run you’ll discover that you’ve dramatically quickened your learning pace. Giving up your mother tongue hurts, but it does benefit you more in the end than trying to learn while still using English!

Now, giving up a mother tongue is easier for some people than for others. Expats living in a country where they’re learning their target language will find it far easier to stop speaking English than for someone in the U.S. trying to pick up Chinese or French. But just because you are living in a country where it’s impossible to avoid English, it doesn’t mean you can’t find small ways to immerse yourself in your target tongue. Tell your language teacher that you are giving up English during class and are not allowed to use anything other than the language you’re learning. Find ways to penalise or reward yourself if you stick to it! Look for language meetups where you are forced to speak another language for a full hour. Even if it’s not the same as immersing yourself in a country where your target tongue is spoken, you’ll still be surprised at how much progress you make by changing a few small things about the language learning process! 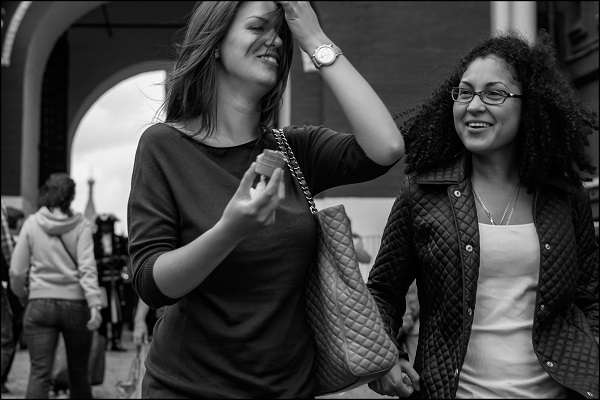 Being an expat is hard and when you’re far from home you tend to radiate towards the familiar, namely people who speak the same mother tongue you do. This is by far one of the biggest stumbling blocks to effective language learning and something you’ll have to sacrifice if you decide to go English-free for even a couple weeks. No one will understand you quite the way a fellow expat does, but gearing your entire social experience abroad around your expat friends can make it difficult to give up your native language or make the advances you want in a foreign one. There’s a reason why, when you move abroad for the first time, you’ll always meet expats who have lived in the country for years, sometimes decades, and still can’t carry out a basic conversation! A good start for giving up your mother tongue is to agree to do it with your flatmate. Start small, then build up to include other people in your English-free group. I can guarantee that there will be more than a few expat friends who will jump at the opportunity to really improve their language skills!

Have you ever given up your mother tongue when learning a new language? Share your experience with us!