How we greet says a lot about us. It signifies where we come from, who we are and how we interact with others. Every culture has a distinctive way of greeting. Whether you are greeting your friends, your family or just a new acquaintance, there are always social norms that vary from country to country.

If you’re from the United States, a strong handshake with firm eye contact is the way to greet someone, it comes across that you are keeping a distance but still engaging. Historically, North Americans shake hands because in centuries past when we carried swords we pulled them out with our right hands, so when you shook someone’s hand with your right hand it showed that you came in peace.

For the Inuits (Eskimo), the Western version of the Inuit kiss is two noses bumping together. However, the true “Eskimo kiss” is when the nose and upper lip are pressed against the cheeks or forehead of a loved one and then by breathing on the skin and hair they are both suctioned by the nose and upper lip. This greeting is called Kunik and came into practice by the Inuits because often all that is visible are the eyes and nose while the rest of the body is protected from the cold. 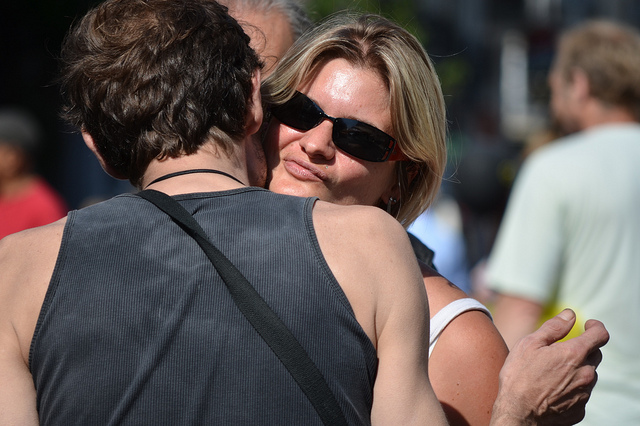 Now the French are notorious for their greeting, which includes numerous cheek grazing kisses called Fair La Bise. The amount of kisses you give depends on what region you are from and the social class you grew up in. For example: the working class normally gives four kisses and upper class tends to give two kisses, while men kiss one another within the same family, but no one would ever kiss someone from a higher rank unless they initiated it.

Compared to the French, the Thai people may come across too reverent because their greeting looks more like they are praying. Thai people greet one another with hands clasped and with a slight bow and this greeting is called “wai”. It originated in India, where people do the same bow and say “Namaste”.

In the Middle East, the appropriate way to greet someone is dictated by the Quran, for instance, a right handshake is normal between the same gender while a handshake and a kiss on each cheek are meant for family members and close friends. In addition, people often say assalamu alaikum (اَلسَّلامُ عَلَيْكُم “peace be upon you”), and reply with wa alaykum as-salam (وَعَلَيْكُمُ اَلسَّلامُ “and upon you be peace”).

Similarly in Ghana people typically greet by saying Akwaaba or “Welcome” and greet others by going from right to left and always using their right hand because the left hand is seen as the“toilet hand”. The West African hand greeting is also used Ghana, where shaking hands the middle finger snaps the middle finger of the hand you are shaking and the louder the snap the better.

A greeting shows a lot about what culture you come from which is why you should always be careful to respect a cultural greeting and when in doubt look it up. Because perhaps a handshake could be viewed as distant and awkward for those who enjoy a kiss on the cheek.

From Tolkien to Talking: What it Takes to Make a New Language Read more
See more articles about Cultural Differences, Observations