We all want more of it, unfortunately it doesn’t grow on trees. No doubt you run into concerns regarding money rather often, whatever you call it — money, cash, coin, dinero, greenback — it impacts the lives of almost everyone.

As money makes the world go round it’s no wonder there’s a ‘wealth’ of vocabulary used to go along with it. There are many words that seem to be used interchangeably, and while there are definite similarities, each of these words has a different meaning and/or origin.

Money is too old for us to know for certain where it originated, however some say it came from the Old French word moneie which in turn came from the Latin moneta, a title for the goddess Juno, whose temple in Rome was responsible for creating mint. Mint comes form Old English myntan, “intend, purpose, determine, resolve,” and this comes from Proto-Germanic muntijanan, meaning “to think, consider.” Cash is from Old French casse or Italian cassa, which means “box,” it literally meant a “box of money.” Lastly dinero is “money” in Spanish.

When you have a lot of money, you might call yourself wealthy. Wealth originates from the Middle English wele, meaning “well-being.” To be rich, is to be “powerful and wealthy,” taking from the Old English rīce, which is a relation of the German reich. If you’re wealthy it’s probably because you make a large profit – from the Latin proficere – “to advance, pro- ‘on behalf of’ and facere ‘do.’” 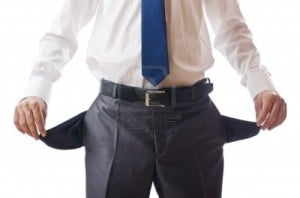 Not all of us live a life of luxury (From Latin luxus – excess), some of us struggle to make ends meet, you might even say we’re poor, which is to say we’re pauper in Latin, derived from pau-paros – “producing little.” Maybe we’re not poor because of how much we earn (Old English earnian – “deserve, merit, win”), but by how much we borrow, leaving us in a mountain of debt; from Old English dete, “thing owed.” Because of this we’re fearful when we look at our bank accounts, only to find that it is lacking, which is the meaning of the Latin word deficere, deficit.

All in all, what this ‘money system’ is there to do is allow people the ability to trade (Middle Low German track, “course, way of life); it designates both physical objects  and otherwise (time, labour, ability, knowledge) with a value – From Latin valere “be strong, be well,” and valoir “be worth,” which is where we get the terms “valor” and “valiant.”

You might notice that not many of these words have changed significantly from their first inception, most likely due to the fact this system of trading value has been ingrained in society for so long that there has not been any need for change.

Do you think money can buy happiness? Or is it the root of all evil?

Is that the real you? Read more
See more articles about French, German, Italian, Observations, Spanish