Spain is an amazing country with a fascinating culture and traditions that date back hundreds of years. It also happens to be home to some of the wackiest festivals around! If you’ve got a penchant for the strange, then read on to learn about eight of Spain’s weirdest festivals and fiestas. 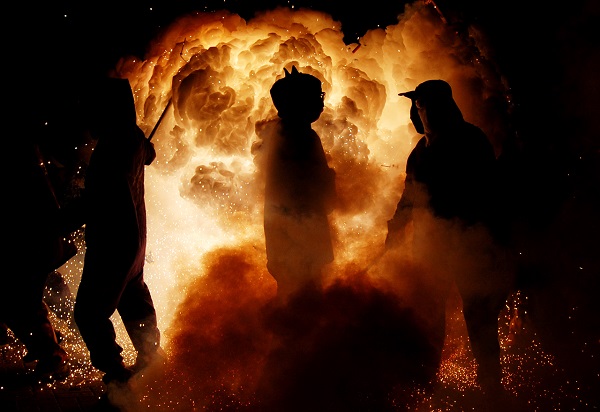 This fiesta takes place in the village of Mancor de la Valle and is full of some truly ghoulish surprises! During the day the festival seems harmless enough; you can stroll the town sampling traditional food and looking at local handicrafts, but at night the devils are set loose. Participants dress up as demons and don frightening masks before taking to the streets wielding fire. Locals gather to watch the spectacle, drink wine, and dance to bagpipes and drums.

The ‘Day of the Geese’ is a festival held in the town of Leikeitio in the Basque region of Spain. A greased-up dead goose is hung over the water and young men jump from their fishing boats and try to separate its head from its body. The fun part is the spectators get to control the rope and try to shake the participants loose! Fortunately, thanks to animal rights advocates, live geese are no longer used for the fiesta like they once were.

This is probably one of Spain’s most popular fiestas, due to it being immortalised in books and movies all around the world. Still, that doesn’t detract one bit from how truly weird La Tomatina is. Participants pelt one another with tomatoes in the world’s largest tomato fight every year in the town of Buñol. Interestingly enough, La Tomatina isn’t all that old as it has only been celebrated since the 1940s. And yet, no one has a clue as to how exactly it came about! 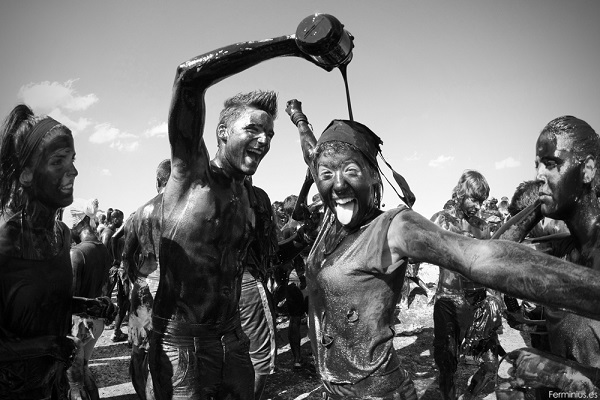 If you thought La Tomatina was all about getting dirty, you need to check out Spain’s filthiest festival: Cascamorras. Every year locals from the village of Baza re-enact a medieval dispute their ancestors had with the neighbouring Gaudix. Basically, everyone drenches themselves in oil and grease and pelts intruders with paint and eggs.

This one might be hard for some mums to watch as it involves grown men leaping over infants. This bizarre fiesta has been carried out yearly since the 1620s. The men dress up as devils and leap over the babies as a way to cleanse them of original sin.

The San Fermin festival is another of Spain’s most well-known—and we have Ernest Hemingway to thank for that! Hemingway made the festival famous in his book ‘The Sun Also Rises’, and after it was published the town of Pamplona began to attract thousands of tourists and spectators every year for their famed running of the bulls. Men run through the streets with the bulls all the way to the bullring where these same bulls will fight it out against some of Spain’s best bullfighters. Injuries abound and the occasional death makes this one of the more dangerous fiestas to take part in.

Since we’re on the topic of fire, we can’t forget to mention one of Barcelona’s most beloved festivals: la Fiesta de la Mercé. Every September a city-wide carnival brings concerts, parties, and activities to the locals (and travellers too). The Festa de Foc is perhaps the most well-known part of this particular fiesta, where dragons are paraded through the streets while massive amounts of fireworks are set off.

Spain is a nation of wine-drinkers so what better way to celebrate your proud Spanish culture than by gathering in the summer to slosh friends and family with buckets of wine? Yes, you read that right! San Asensio is host to Spain’s most popular wine battle and you can use almost anything when you head into the fray: water guns and pistols, sprayers, and buckets. Just to be clear, not any type of wine goes. You are only allowed to use the locally produced Claret, a type of rosé wine, for doing battle!

Which of these Spanish festivals seems like the strangest? Do you know any others? Share your thoughts below in the comments section!