The Many Levels of Language

When you start to speak, what do you think about? If someone asks you what you had for dinner, you simply put the words together right? “I had a delicious sirloin steak with potato mash and a salad, then a creme brulee for dessert.” Sounds amazing, consider me envious, but what was involved in that sentence? You put the words together in the correct grammatical way, but there is a lot more going than just that.

For starters, the word “delicious,” how do you say that? Well, you start with a “de” sound, move on to the “li” sound, and so forth until you’ve formed the word; These are syllables, and come under the level of phonology. This ‘Phonology’ is concerned with the organization of sounds, which are usually letters or syllables, which when arranged correctly create meaningful words. Phonemes are small sounds that make a difference to the meaning of a word, consider the difference between “bed” and “bad,” they have a different phoneme. These are also one of the main differences in accents, if you compare a British accent to an Australian one, the differences are likely to be in the pronunciation of the phonemes.

Syntax, yes, it’s an in depth and rather broad subject, so I’ll try to keep it brief; syntax is the arrangement of words and phrases to create well-formed sentences in a language. It tells you the type of sentence, such as declarative, interrogative, exclamatory or imperative, it also tells you the voice, passive or active. It is different to grammar, as grammar is a set of rules that explain how words are used in a language; syntax deals with the functions of words within a sentence: subjects, objects, attributes and such; grammar is the framework of a language and syntax is part of that, just as morphology and phonology are. 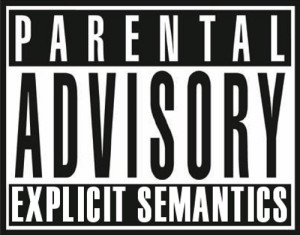 Finally we have semantics, the study of meaning and expression through language. This can include things such as connotations and denotations, think of advertisers using certain words in certain ways to generate emotions. Often synonyms play a large role with semantics, as you choose words with similar meanings but a different ‘feeling’ to them; I could say “I have a large dog,” or “I have an enormous dog,” maybe even “I have a monumental dog,” all of them have similar meanings, but you take away something different with each phrase. A word undergoes a semantic change when the meaning changes throughout time, a great example is the word “awful,” which originally meant “full of awe,” now it has come to mean something horrible, appalling, dreadful.

These levels are present in all languages to an extent, but they change throughout, with different pronunciations, word orders, and sounds that make a language unique and special, recognizable, fun. Can you think of any examples of the differences between languages?